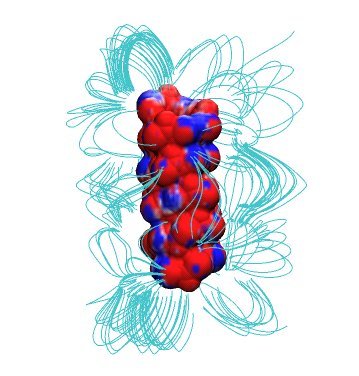 In the previous lecture we've learned about the importance of long-range electrostatic interactions for an accurate modeling of biomolecular macromolecules in aqueous solution. Today's practical will deal with the computation of these interactions by means of the so-called non-linear Poisson-Boltzmann equation (PBE)

introduced during the last lecture.


In the equation above

is the number density of ions of type i in the bulk solution,

is the charge on the ion,

is the electrostatic potential in that region of space,

is Boltzmann's constant and

is the charge density due to the macromolecule under consideration. Note that the dielectric constant epsilon(x,y,z) is a function of the location in R3 (inhomogenous epsilon). The nonlinear PBE given above can be linearized

via a Taylor expansion of the sum at the right hand side (as being shown last week).

To obtain solutions of the PBE on a computer, we are going to use APBS (Adaptive Poisson-Boltzmann Solver), a software package for evaluating the electrostatic properties of nanoscale biomolecular systems, which is already installed on the computers you are working with. APBS

approach. For more details on this, please see the official program web site.


The files needed for this practical can be downloaded here. You will need to unpack

the archive by typing: 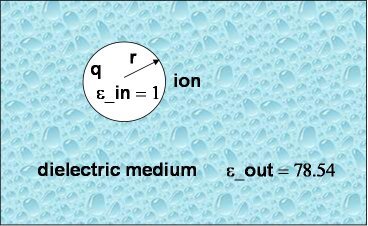 In our Born solvation model we assume zero ionic strength.

Two things are needed to run a calculation with APBS:

For our Born solvation model the PQR file only contains one atom with partial charge +1.

The input file for APBS is somewhat more extended and looks like this:

First, APBS reads the PQR file named born.pqr. Then two PBE calculations with different solvent dielectric constant, 1 and 78.54 (why are we using this value?), respectively, will be performed (named solvated and reference), and the difference between these two free energies will be printed at the end of the run (Please note: you do not need to know the precise meaning all the other parameter in the APBS input !!!)

Compare your computed result with the analytical value obtained via

where R is the radius of the ion. Where does the small error come from?

You can change the radius in the PQR file, repeat the calculation and compare

again the numerical and the analytical result.

We can now also display the electrostatic potential by typing 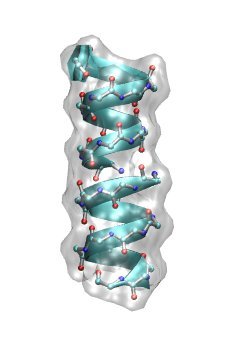 Electrostatic potential of the ion channel Gramicidin A

Now we are ready to perform a PBE calculation on a biomolecular macromolecule. To this end we have chosen

antibiotics consisting of a heterogeneous mixture of six antibiotic compounds. Gramicidin A is a linear polypeptide containing 15 amino acids. It kills pathogenic organisms by destroying the cationic (Na+,K+,H+) concentration gradients that are vital for their proper functioning. In other words, monovalent cations

can easily leak through gA once it got incorporated into the cell membrane of the organism.

and rotating the polypeptide.

Also have a look at the SYSTEM.pqr file. What is so far the (only) major difference compared to the previous Born ion example?

At this point we need to specify the internal (i.e. inside the protein) dielectric constant for our calculation

(remember: in the Born solvation case the internal dielectric constant was set to 1).

With the dielectric constant being a macroscopic observable, but the biomolecular macromolecule

being a nano-sized molecular entity, it is often not clear what value

to choose, and one should consider the internal dielectric constant as an adjustable parameter within the PBE framework. It usually ranges from 2 to 20, depending on the molecular details of the macromolecule under consideration. (What determines the lower bound of the range?)

We can now easily perform the PBE calculation inside VMD. VMD - Visual Molecular Dynamics - is a molecular visualization program for displaying, animating, and analyzing large biomolecular systems using 3-D graphics and built-in scripting. You need to highlight the "START.pdb"

representation in the "Main" window, right mouse click and choose "Load data into molecule". Then

chose "SYSTEM.pqr" and type "Load". This will load the PQR file for gA.

Now go to the "Extensions" section in the "VMD Main" window and select "Analysis -> APBS Electrostatics". Click on "Edit" and change the number of the x,y,z grid points from 129 to 65. Also change the

You can follow the APBS computation in the "vmd console" window. After completion accept to load the electrostatic potential into the top molecule. Now add two new graphical representation "Isosurface" via "Graphics - > Representation", one for the negative part and another one for the positive values of the potential. Change the values

of the isocontours and look what is happening to the molecular representations.

One can also map the electrostatic potential onto a generated molecular surface. For example one can

macromolecule and then grouping (triangulating) all sphere center points into one surface. To do this, we delete the two isosurface representations from the previous example. Add a new representation "Surf" and change the probe radius to 1.1 Angstroem. Then change the "Coloring method" to "Volume" and in "Trajectory"

adjust the "Color Scale Data Range" to -1 and 1, respectively.

Now you can zoom into the channel region. The striking feature is that the channel area as well as the entrance area show the same coloring, which means the sign of the potential is the same. What sign of

the potential whould you expect for a cation selective channel?

We can check on the sign of the potential by inspecting the coloring scheme used in the representation. 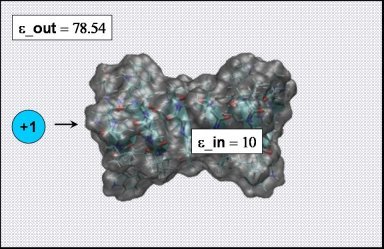 example for varying ion positions. To speed up the process, there are already 9 PQR files with equidistant ion positions spanning the range from -16.0 to +16.0 Angstroem in your working directory. Please have a look at one of the SYSTEM.pqr.* files

As in the Born solvation example, we also need to compute a reference state that only

contains the cation embedded in pure water ( those coordinates can be found in the ion.pqr.* files: have a look at one of them).

You can now start the script by typing

For each snapshot shown the script will run a PBE calculation and extract the solvation free energy difference (you will have to eventually merge it into the respective cation position).

After the calculation is finished, you can plot the free energy profile using e.g. "gnuplot"

Why should the profile be symmetric? Why is it not the case?

You can now change the solute dielectric constant in the "apbs.in" file, repeat the previous

computation cycle and eventually try to reproduce the plot shown below (in case there is time left).

The graph illustrates the dependence of the free energy profile

as a function of the protein dielectric constant. The free energy barrier for Na+ migration

through gA is estimated to be ~ 50 kJ/mol. Which dielectric constant will give a result close to

experiment? Which dielectric constant would you choose if there would be no experimental value

What can we learn from this plot? Does it have the right asymtotics as epsilon_in -> 78.54? 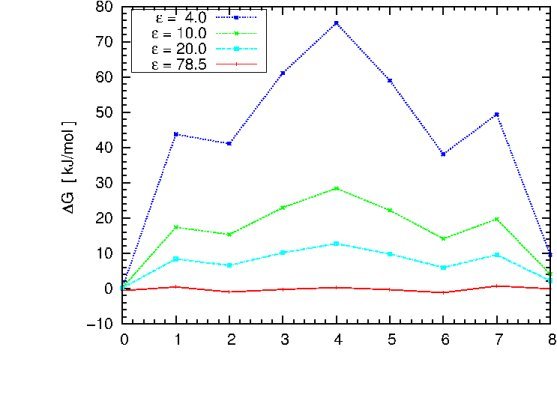