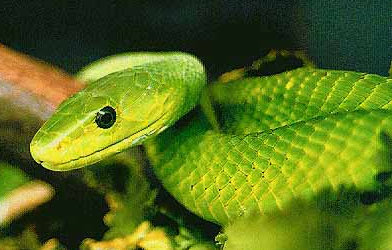 During the last practical the emphasis was on protein sequence

retrieval and anaysis. We will now slowly turn towards protein

based on it's sequence. Specifically, we will predict the structure of

a small protein based on its sequence similarity to another protein,

the green mamba snake. This is the toxin contained in the venom of the

green mamba that endangers the prey after a bite. Click here

for more background information on the green mamba.

First, we will extract the toxin sequence from the SWISS-PROT

database. Search for "alpha-dendrotoxin". Click on the required sequence

bottom of the net page, right-click on the link 'View entry in raw

text format (no links)', and save the swiss-prot file to a local file

called "venom.swissprot". Also save the sequence in FASTA format

(bottom right) in a file like venom.fasta or similar, for later use.

As discussed in the lectures, a protein's sequence (primary structure)

structure. The principle of such methods is based on the fact that

preferences for different types of secondary structure. Alanine, for

example is often found in alpha helices, whereas prolines are known to

prediction algorithms against a databank of proteins with known

structures. One such prediction program is available as an online server:

click the checkbox under 4. to omit the PDB search before

hitting the 'Run' button. The server may take some time to complete,

after which the prediction is presented. View the results in HTML format.

You'll notice that the JPRED server first carried out a multiple

Why do you think this is? answer.

The prediction is presented near the bottom of the window, in the line

starting with "jpred". A dash (-) stands for unstructured

(i.e. neither helix nor sheet), E stands for extended, or sheet, and H

stnds for helix. As you can see, the serve predicts the protein to

start from the N-terminus with an unstructured loop, followed by two

beta strands and a short helix.

Now that we have the sequence of our protein of interest, we need a

suitable template structure of a homologous protein on the basis of

which we can build a model of the venom structure. For this, we visit

the Protein Data Bank. The

pancreatic trypsin inhibitor. In the

search field, search for "trypsin inhibitor bovine". Among the search

select the corresponding "PDB" format and no compression

(upper left table entry). You should be prompted for a location where


Have a look at the structure by starting rasmol. In a unix window, on

Please note that the commands in bold

print can be easily transferred to the command prompt with

button pressed, and paste by pressing the middle mouse button).

We now see a so-called wireframe

representation of the protein structure: atoms (with different colors

for the different chemical elements: grey for carbon; red for oxygen

and blue for nitrogen) are not shown directly, but the

bonds between atoms are shown as lines. Under "display", also try

other representations such as "sticks", "spacefill", "ball & stick"

and "cartoons". Note that the structure startes with a long,

beta-sheet) and ends with a short alpha-helix. Exit rasmol under "file" 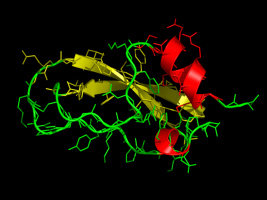 alpha-dendrotoxin from the green mamba snake: its sequence and a

structure of a homologous template. For building the model, we use the

modeling package. To start WHAT IF, type:

on the WHAT IF prompt, load the template structure with:

and press enter if WHAT IF asks for a name.

with the structure of the bovine trypsin inhibitor structure that

we've just loaded. For this, we first need the protein sequence

corresponding to the protein structure that we have loaded. This can

be done by WHATIF:

and as output file name take:

First load the sequence that corresponds to the template structure:

Now load the sequence of the green mamba venom:

and choose the Swissprot format (3).

We now have both sequences loaded and can perform the alignment:

For the first sequence, choose

and for the second

and choose default values for the gap-open penalty and the

We see that the percentage of sequence identity is only 37%. So our

which almost two-thirds of the sequence is different! First, write out

the aligned sequences for later use:

And now it is time to build the actual model:

prediction module, WHAT IF will take a moment to complete. As soon as

the WHAT IF prompt returns, write out the model structure with:

View the structure with

We will now validate our model structure using a protein structure

validation server. This server compares the structure to a database of

known structures and checks if the geometry (bond lengths and angles),

atom contacts etc. are comparable to other protein structures.

For this w well use the

(model.pdb) using the browse button and enter the main page. After the

Now we can analyse the results and view e.g. the main Ramachandran plot (click the

"Analyse geometry without all-atom contacts" and after that "Run programs").

Look at the Ramachandran plot, in either kinemage or PDF format.

plus contour lines depicting the most favoured regions (as found

for other proteins). As can be seen, all residues are located in the

favoured regions so there are no outliers to worry about.

in the model structure. Note that such tools can be extremely useful

for identifying possible errors in model structures (or in

experimentally determined structures), but that the real hard test for

our model structure is the comparison to its x-ray

structure. Therefore, we will now download the true structure from the

The entry is called 1DTX.pdb. Retrieve it from the server as we did before and download

it to your local account. View the structure with

How good was the secondary structure prediction?

the two structures superimposed, such that we can compare atom by atom

where the main differences are located. This can be done with the

program g_confrms. This program needs an additional file, the

generation of which would go beyond the scope of this course, which

can be obtained here . Run g_confrms with the

(select "4" to select the protein backbone for fitting).

g_confrms prints that the overall deviation between the two structures

(measured over all atoms in the protein backbone, so excluding the

g_confrms has written a PDB file with both structures superimposed:

To concentrate only on the protein, and remove the ions from the

The true structure is colored blue, our model

structure red. As can be seen, the two structures are rather

similar. Especially the backbone structure is rather well predicted by

the model. Some sidechains, however, show larger deviations.

Now, for comparison, we are going to build a model using an

server. Note that this server requires a working E-mail address.

Put your E-mail address in the specified field, provide a name and title,

use the SWISS-PROT access code: P00980). Before hitting the "Send

request" button, scroll down to the options, and below "Provide your

own templates", upload the structure of bovine pancreatic trypsin

inhibitor (the file 4PTI.pdb that you've dowloaded before from the

Protein Data Bank) as "template file 1". Further below, at the

hitting the "Send request" button. Depending on the load of the

server, it may take a couple of minutes for the email to arrive with

the coordinates. Actually, you may receive multiple emails, with a

status of your request. The last E-mail should contain the coordinates

in PDB format as an attachment. If you do not receive this E-mail

within a couple of minutes, you may retrieve the coordinates here.

Assuming your model is called "swissmodel.pdb", superimpose the

coordinates to the correct structure:

Again select "4" when prompted for a group. View the result with:

Also, compare this model with the model generated by WHAT IF:

Select "4" twice when prompted for a group. View the result with:

would you prefer, and why?