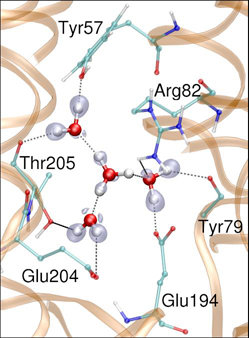 methods as a viable alternative to the Hartree-Fock approach.

two electronic structure methods, which will lead us to the field of

so-called ab initio molecular dynamics or "on the fly" (direct) MD. This is opposed to

the common force field techniques that are used to represent the potential energy surface,

before we start our simulation. In ab initio dynamics the forces are computed "on the fly", i.e.,

at every new set of coordinates generated during our molecular dynamics run. To this end,

performed in order to compute the interaction energy and the forces on the atoms (nuclei).

The package we going to use for the electronic structure computation is again MOLPRO (see previous practical), which has been developed

by Peter Knowles and Hans-Juergen Werner over the last 15 years. MOLPRO has been used in the previous

In order to be able to perform "on the fly" dynamics, we also need a MD program that acts as a driver

for the electronic structure calculation. Here we going to use speedEVB, which is a molecular

dynamics packages that provides a numerically efficient implementation of the Multistate

model introduced in the previous lecture .


The files needed for this practical can be downloaded here. You will need to unpack

the archive by typing:

a so-called water wire. To be able to do so, we need a model of our potential energy surface that allows

for explicitly break and form chemical bond. A model that allows for that in an elegant way

dynamics in aqueous systems. The MSEVB approach is nowadays used extensively in biomolecular

A water wire is a onedimensional alignment of water molecules that

are held together via hydrogen bonds. In case the water molecules are aligned properly, a

proton can migrate through the water wire by the so-called Grotthus mechanism. Grotthus

mechanism means that though a proton is transfered from one end to the other of the wire,

the movment of the individual atoms is quite small, i.e., a few tenth of an Angstroem.


Aligned water wires are found in a variety of proteins, like e.g. in Bacteriorhodopsin or

Cytochrome c Oxidase, where they constitute a crucial part of the proteins functionality.

That means that lack of the water wire will lead to misfunction of the respective protein.

and locate the water molecule that carries the excess proton.

The program will report all its events to the screen output and will finish after 1000 MD steps.

You can have a look at the generated trajectory by starting the VMD script:

Locate the excess proton and following its dynamical path through the water wire. How many bonds are formed and broken along the pathway?

Besides the trajectory additional information has also been written

to the file system. Have a look at the energies, i.e., kinetic energy, potential energy and total energy, by

What do you expect for the total energy of a system that follows Newton's (or Hamilton's) equation of motion?

Now you can have a look at the amplitudes of the individual ground state electronic expansion coefficients for the localized valence bond states as a function of simulation time. The amplitudes

that resides on each water molecule at a given time. Typing will display the results:

seen in the previous VMD movie?

Identify on how many water molecules the excess charge is distributed at a given time. Can the

to define is the extend of the QM region, i.e., the part of the total system that is treated

by means of an electronic structure method. The rest of our system will be handled by standard force

field. The QM region will be the core region of our protonated water cluster that is embbeded

in the overall water wire and is simply defined in the input files (fort.10) as:

That just means that the first ten atoms will be treated as quantum-mechanically (QM_REGION), and the rest will be considered as being part of the MM treatment. See the picture to the right that shows the QM (H7O3+) cluster in thick ball-and-stick representation.


For the QM computation, which will be performed with MOLPRO, we will have to specify the electronic structure method that will be used (Hartree-Fock, Density Functional Theory, Moeller-Plesset etc.)

and an appropriate basis set. This is done in the input file "qm.com":

Compare to last weeks practical only the command "ks, b3lyp" (which stands for Kohn-Sham) appears as the new DFT key word, and "b3lyp" specifies the density functional that is used during the calculation.


To start our simulation, which will perform 40 molecular dynamics steps, just type

screen output: this calculation will take a couple of minutes. 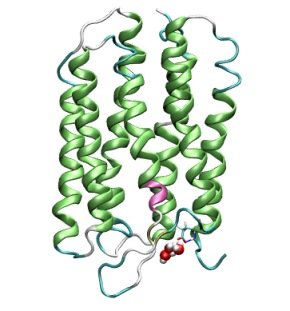 steps into chemical energy. It can be regarded as a simple model system for larger protein complexes

that perform light-driven energy conversion, like for example the Photosynthetic Reaction Center that is found in


All necessary input files are given in the working directory "bR_QMMM", so you only need to type

to start the simulation. In total 20 steps will be performed and can be displayed using VMD

elements and the QM region consisting of 3 water molecules and one excess proton at the extracellular entrance area of Bacteriorhodopsin.

will show you the simple definition of QM atoms. Note that we could select any region within the

in order to compute observables with high accuracy.