Mechanism of water permeation and proton blocking in Aquaporins

Simulation of a membrane protein 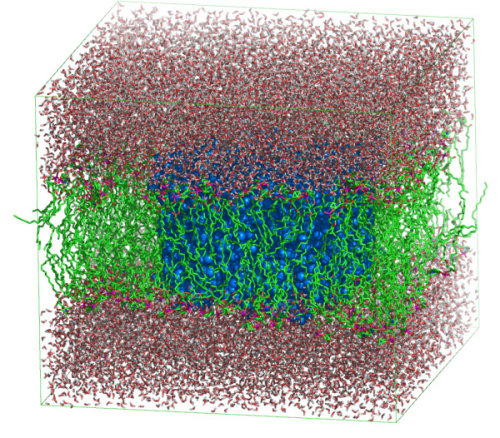 Have a look at the structure using pymol:

Before we can feed the structure to gromacs, we first have to delete

aquaporin. We do this with the unix 'grep' command. The '-v BNG' option tells

'grep' to print all lines except for the ones containing the string 'BNG':

now we can generate hydrogen positions and a gromacs topology using pdb2gmx:

When asked for a force-field, select "3" (the OPLS/AA-L force-field).

You may remember from the lecture that aquaporins are active as

tetramers, so if we want to study water permeation, we should simulate

an aquaporin tetramer. Since we only have the structure of one monomer

so far, we have to generate the coordinates of the other three

monomers based on symmetry. Usually, this can be done with software

like WHAT IF, but in this case it is more convenient to use a small

script that can be downloaded here. Before

we can use the script, we must make it executable:

and now we can use it to generate the tetramer:

Have a quick view on the structure with rasmol:

a look at it with rasmol:

Before we can do the actual merge, we have to position the protein to

and now we can merge the two, removing all lipids and water molecules

that would overlap with the protein:

Analyse the result with rasmol:

You now see the (almost) complete simulation system: a protonated

aquaporin-1 tetramer embedded in a solvated POPE lipid bilayer. Before

a production run can be started (to study water permeaion), the system

would first have to be energy-minimised, counter-ions would have to be

equilibration can be started. Since all this would take too long for

this practical, we now make a leap in time, and pretend we have

already carried out the simulation.

Analysis of water permeation in aquaporin-1 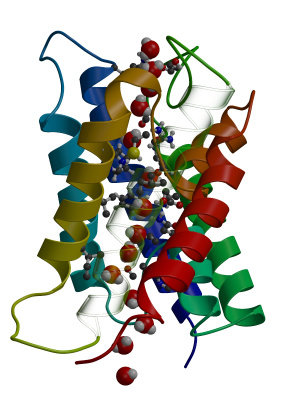 First of all, download the trajectory (fragment) here and a reference PDB file

and create a small animation:

Select "0" when prompted for a group.

You will appreciate the difficulty of analysing

water permeation by simple visual inspection. This is why specialised

analysis tools have been developed to follow all water molecules

during the simulation, and to assess which water molecules participate

in permeation. Gromacs works with the concept of "index groups" which

are basically groups of atoms with a particular property. One could

protein, and then use this index group to filter all CA atoms from an

MD trajectory for subsequent analysis. Such an index file has been

generated that contains a selection of water molecules that

participate in a particular permeation event. Download this index file and extract the protein plus a

selection of water molecules from the trajectory like this:

(First remove the old movie file, as it is quite big)

highlight the water molecules by typing (on the pymol prompt):

Now highlight one of the water molecules by colouring it yellow:

and press the "play button". You now see one water molecule that finds

side. Note that it might have gone just the opposite direction as

well, as no driving force (like an osmotic pressure) was applied

during the simulation. All permeation events, therefore, rest on pure

diffusion of water molecules through the aquaporin pores.

It is always important to test whether the simulation results agree

with experimental observations, whenever possible. In the aquaporin

case, we fortunately have an excellent opportunity to directly compare

our simulation results to experiments, namely to analyse whether the

permeation rate in the simulations is similar to the experimentally

determined one. In total, 16 full permeation events were observed

during the 10 ns simulation, in good agreement with the experimental

particularly critical to make this channel a specific water channel?

Would you expect other small molecules like glycerol to pass through as well? 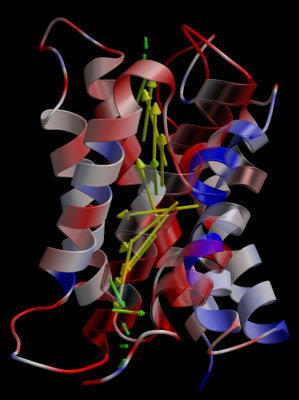 It is critically important that no protons leak across the membrane, as

proton gradients are essential for bioenergetics, like for example in ATP synthesis.

Therefore, it is crucial that protons do not pass through aquaporins, alongside

with water molecules. This is a challenging task, as usually water, or water

pore, whereas on the other hand, actively block protons from passing?

Therefore, let us carefully check the behaviour of water molecules in the pore

to see if we can discover something about a possible mechanism of proton blocking.

Would you say that the water molecules are oriented randomly inside

If you analyse the water molecules in the pore carefully, you may

notice that the water molecules are not oriented randomly inside the

aquaporin pores. In both the extracellular and intracellular halves of

the pore, the oxygen atoms of the water molecules point towards the

center. In other words, water molecules rotate by approximately 180

degrees upon passing the pore.

Question: How can this behaviour be

explained in terms of interactions between the protein and passing

water molecules? How will this behaviour affect the permeation of

water? How will it affect the permeation of positively charged ions

and protons? What about negatively charged ions?