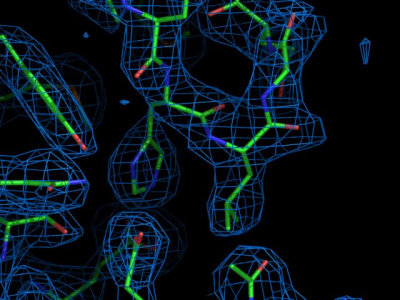 In the last lectures we learned how protein structures are determined experimentally.

Today, we'll focus on how computational techniques are employed to aid

There are two main techniques for solving protein structures: x-ray

As can be seen from the current

PDB holdings, more than 42,000 protein structures have been solved

so far, and are available from the

Protein Data Bank. About 13% of these are NMR structures, the rest

are x-ray crystallographic structures. As can also be seen on the PDB holdings list,

the number of solved proteins grows even faster, due to advancements

in structure determination techniques. Nevertheless, the number of

known protein sequences is almost an order of magnitude larger

(currently about 276,000, as available from the SWISS-PROT

As we've learned last time, protein structures are stored at the Protein Data Bank, from which

individual protein structures can be retrieved as so-called PDB

files. Before we will turn to the structure determination itself, let

us have a closer look at a typical PDB file, to see what can be

learned about the background of the structure (experimental conditions

etc.) and the structural quality (the resolution, coordinate uncertainty).

be downloaded from the Protein Data bank.

The initial lines of a PDB entry contain information on the

protein, the source, the names of the people who sent the entry to the

PDB, references to literature that describe the structure in detail,

and some basic information regarding the crystallographic

data. Especially critical to check are the resolution and the R-factor

(or free-R factor), that contain information on how well the deposited

Following the introductory material, some specific information regarding the protein and its crystalline form are provided, including the protein sequence, secondary structure, disulfide bonds (where present) and the like. Also the dimensions of the unit cell, the space group and related information are given.

Then come the actual atom coordinates (or structure), whose listing

takes up most of the average PDB file. Each listing begins with

"ATOM" and is followed by:

This goes on for a while, until the end of the peptide chain, which is marked by the "TER" line. If there are any other molecules that co-crystallized with the protein (such as solvent molecules or ligands) they are listed as "hetero-atoms" near the end of the file. 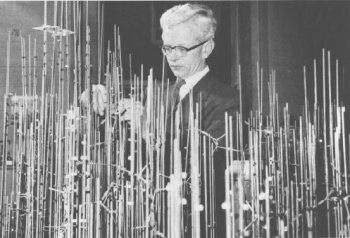 The main technique for determining protein structures is x-ray

crystallography. Since the first protein structure (myoglobin) was solved by this

technique by John Kendrew and Max Perutz in the late fifties, several

thousand others followed. As can be appreciated from the picture on the right,

which shows John Kendrew with the structural model of myoglobin, at

that time the determination of a structure the size of a protein,

without the aid of a computer, was a formidable task.

It is important to note that in both x-ray crystallography and NMR,

protein structures are not measured directly in the

experiment. Rather, a set of data is collected (a diffraction pattern

or a NMR spectrum), from which a model of the protein structure

is derived. To appreciate the difference between data and structure,

we'll now look at two different structures of the same protein, and

the corresponding x-ray crystallographic data. For this, we will

1BRR and 1QHJ. Save both PDB files to your local account (see the last

lecture if you forgot how to download from the PDB).

View the structures with rasmol: 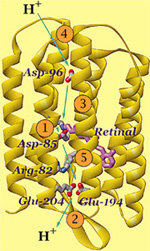 to see the main features of the structure:

To highlight the dye (the light sensor in the protein interior):

select ret and *a

Have a close look at the structure, before repeating the procedure for 1QHJ.pdb

in a different window, such that you can compare the two structures.

By looking at the structures, which of the two structures would you

Remember, so far we only looked at the coordinates, which represent a model

that was optimized against the actually measured data. So, let

us now have a look at the data. In x-ray crystallography, data are

collected by measuring a diffraction pattern that is obtained from

x-rays reflected by a protein crystal. As mentioned in the lecture,

since only the amplitudes of the diffracted waves were collected, not

their phases. In x-ray crystallography, however, there are a number of

but we will not go into that in detail here. What is important to

remember is that eventually, an atomic electron density map is obtained.

to view the electron density map 1BRR. Enter the PDB code (1BRR), and

wait for the summary page to load. Several plots with information on

this structure are available. Feel free to browse around to check the

meaning of the individual plots. At the bottom of the summary, the

electron density viewer can be activated. Select the "Upssala viewer"

centered around residue A83 before clicking "Go". After a while, a

java applet should appear with the electron density and the model

structure visible. Shift the map somewhat to focus on the side-chain

should be centered, until you are in the six-membered aromatic ring).

Do you find the electron density for the aromatic

ring convincing? Now shift the focus to residue A35 (by entering "A35"

in the text field under "center" and then hitting "center"). How is

the fit between the model and the data here? To see the retinal, the

light sensor in the center of the protein, center on A999.


Now repeat the procedure for entry 1QHJ. How is the fit for residue

Based on the data and on the model structures, would you say there is

a large impact of the resolution of the data on the accuracy of the structural model?

The highest resolution x-ray crystallographic structures have a

resolution of approx. 0.8A or even somewhat better. To see an example

of such a dataset, look at the density for structure 1G6X, and center

around residue A23. Do you recognize the difference in appearance of

Although the resolution of this structure is rather high, at 0.86A, the

hydrogen atoms (e.g. on the side chain of TYR23) are hardly

visible. Why is this? answer.

The other main technique for determining protein structures is NMR. In

contrast to x-ray crystallography, no crystals are required for an NMR

experiment. Rather, the structure is determined of the protein in

solution. Therefore, it has the advantage that the protein can be

studied in its native environment. On the other hand, the resolution

NMR experiment in detail. We will therefore only briefly touch on the

experimental setup and then focus on the structure building and

refinement step based on the obtained data.

strong magnetic pulse(s). Mainly hydrogen atoms give rise to the

signal, because of the magnetic spin properties of the hydrogen

nucleus (a proton). The naturally occurring isotopes of the other

elements that are found in proteins, carbon (12C) and

have a zero nuclear magnetic moment. Nitrogen (14N) does

have a non-zero magnetic moment, but can usually not be used in NMR,

for reasons that would go beyond the scope of this course to explain.

These elements, therefore, can only

be utilized in NMR experiments when chemically replaced by a specific

relevant information is usually obtained from a so called NOESY

result of exciting or saturating the resonance frequency of another

nucleus. Since this effect is distance-dependent, it can be used to

derive the distance between an interacting pair of protons. In

practice, protons closer than 6A apart can be identified this way.

Now, we will calculate a model of the structure of a small protein,

the B1 domain of protein G,

from the proton-proton distance information obtained from a NOESY

here. You can have a look at the file

choice) to assure yourself that there are indeed only distance bounds

listed in this file. Additionally, we need an initial guess of the

structure. Since we don't know the structure yet, we have to start from

an unstructured peptide chain, which can be obtained here . Have a look at the structure with:

Finally, we need something called a

molecular topology, a chemical description of the protein: which atoms

does the molecule contain, which atoms are covalently bonded to each

other, etc. This molecular topology file is available here . Now, in principle, we have all the data

experimentally determined distances. The only thing we still need is

an input file for the 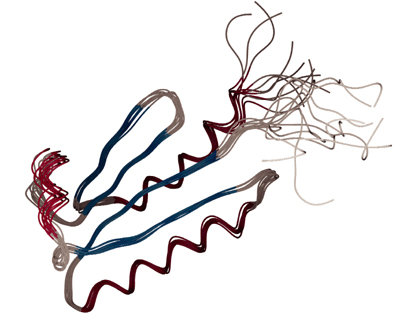 Note that, in contrast to x-ray crystallography, where a

single structure is presented, to reflect the fact that the NMR experiment probes

an ensemble of protein molecules in solution, an NMR structure is

usually represented by an ensemble of structures, that all fulfill the

simulated annealing. This is a computationally intensive calculation,

as the structure is slowly, dynamically transformed from the extended

starting conformation to the real structure, by a slow-cooling

simulation, also called simulated annealing. As the calculation is

running, we can have a look at how exactly such a calculation proceeds,

and how the final structure is generated from the starting

on the white bar, in the top pymol window, type:

window, to see an animation of the simulated annealing structure

calculation procedure. If the movie plays too fast, on the menu, under

When the CNS structure calculation has finished, switch back to that

to combine all ten generated structures into one file. View the result

Which parts of the structure are well-defined, and which parts show

G, available under the PDB code 1PGB. Download it from the Protein Data Bank and compare it to

the B1 domain of protein G? hint