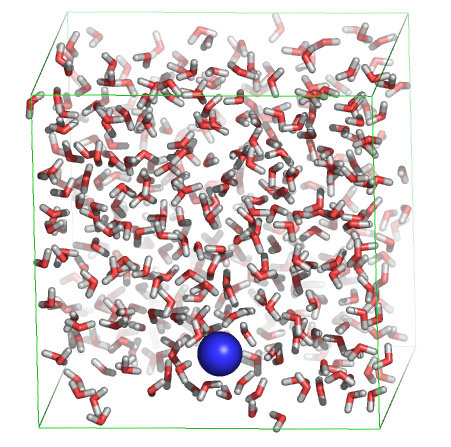 Molecular simulations can be carried out to gain either dynamical or

energetical information on the simulated system. Today we'll focus on

different ways to extract energies and free energies from simulations.

Solvation free energy of a sodium ion in water

simulations, the system is gradually "morphed" from one state to

another (let's say from state "A" to state "B"), during which the

effect of this perturbation onto the free energy is monitored. In

practice, this is achieved by defining a morph parameter lambda, which

is defined to be zero in the initial state (A), and one in the final

state (B). By collecting the derivative of the potential energy with

respect to lambda during the simulation, and by integrating over

lambda afterwards, we gain access to the free energy. We are now going

water box. In order to start the simulation, download the

First have a look at the starting structure:

Note that the sodium ion is already "present" in the starting

structure. Now have a look at the topology "na.top", with 'xedit',

'nedit', 'more' or 'less', and look for the line containing "Na" under

"[atoms]". You'll notice that two states (A and B) are defined, with

charge 0 and 1, respectively. This means that during the simulation,

the charge of the sodium ion will be slowly switched on.

Analyse the free energy change by:

In order to compute the free energy, we must integrate dG/dlambda over

dlambda. Instead, we have dG/dlambda as a function of time. This is

not a problem, as we know that lambda changed from0 to 1 during this

time (10 ps). So instead, we can integrate the curve over time, and

divide the obtained value by ten to derive the desired free energy.

To integrate, under "Data", select "Transformations", followed by

Instead of integrating dG/dlambda, we can also compare the initial and

final values of the potential energy of the system:

Subtract the initial value from the final value.

What value do you get? Why is this value so much larger (in absolute

value) than the free energy difference obtained by integrating

One important check in simulations in general and in free energy

simulations in particular is to make sure that the answer has

converged. In order to do so, we can either perform a longer (or

shorter!) simulation, and compare the result to the original, or we

can perform the backward transition to see if the free energy

difference is the opposite of the forward transition. In this

practical, we'll do both. First, we'll carry out the backward

transition. Copy the MD parameter file to incorporate the changes:

and open "back.mdp" in your favorite editor (xedit, nedit, emacs,

to make the following changes:

First search for "Free energy", then change "init-lambda" to 1 and

simulation. For this, we'll use the final structure of the previous

And analyse the free energy change using xmgrace. Remember that we now

changed lambda from one to zero, meaning that if we integrate over

time, we should divide the obtained value by -10 instead of by 10.

What value do you get? How does this value compare to the free energy

change for the forward simulation? Would you consider the obtained

If we take the forward and backward

simulation together, is the total free energy change positive or

negative? Which of the two should it have been?

As stated above, another way to check convergence is to perform a

as compared to a shorter simulation. For this, open "fep.mdp" in your

simulations? What would you consider an appropriate length for this 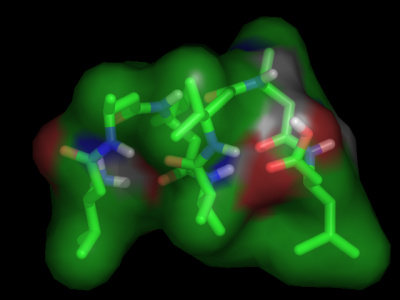 difference between two states because we defined a path connecting the

two states, and we had access to the free energy gradient along the

path. In the case of the ion in water, the path was an artificial path

be computed along a real path, e.g. by forcing an ion across an

electrostatic gradient and integrating the force required to displace

the ion along the path.

There are also cases, however, where such a path, artificial or real,

can not be easily defined. Peptide or protein folding is a good

example. The problem of defining a path is that there are multiple

folding (and unfolding) pathways that connect the (well-defined)

by integrating the force along a pathway connecting the two, we'd

therefore have to follow multiple pathways, and take a weighted

average of the results. In the case, however, where we have a

simulation in which folding and unfolding takes place spontaneously

(i.e. without forcing the system to fold or unfold) and reversibly

unfolded state in a different way, namely simply by monitoring the

fraction of time the system resides in each state. In the equilibrium

case (i.e. if the simulation was long enough to visit all relevant

configurations multiple times) the probability of finding the system

is exactly proportional to its Boltzmann factor. Therefore, for any

Therefore, if we know the respective probability to find the system in

a particular pair of states, we can calculate the free energy

difference between these two states. Note that for this type of free

(coordinates, trajectory) from the simulation, no energies!


To illustrate the above, we are going to calculate the free energy of

the folding of a small peptide. For this, download a

First view part of one trajectory with pymol:

and select "4" followed by "1" when asked to select a group.

window. You see the first folding transition during the simulation at

What kind of structure is the folded structure?

For a more quantitative analysis of the folding/unfolding

transitions, we'll analyse the root mean square deviation of each

structure in each trajectory with respect to the folded

structure. Here we will call the structure "folded" if it has a root

mean square deviation (RMSD) of less than 2 Angstroms (0.2 nm) of the

backbone atoms with respect to the reference structure in pep.pdb.

View the result with xmgrace:

How many folding/unfolding transitions do you observe?

Repeat the same procedure for the other 3 temperatures to generate

following, we can count how many configuration from each trajectory

are "folded" or "unfolded":

if the counting didn't work, then try:

(never mind if you didn't understand that command completely. The

"tail" part throws away the header of the rmsd_340.xvg file, the

finally, replaces the dots in the file with comma's, for the case your

simulation. Repeat the procedure, now to count the number of

"unfolded" conformations. You'll see, at this temperature the system

is folded about one third of the time.

What about the other three temperatures? What would you estimate to be

Assuming that the folding enthalpy is the same for the different

temperatures, how can the entropy difference between the folded and

unfolded state be estimated from the set of free energies? How large

do you estimate the entropy of folding in this case? Is it positive or