Analysis of a gromacs simulation 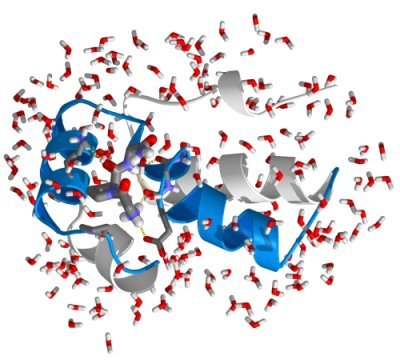 the results. Let us first see which kind of files have been written by

We see the following files:

visual inspection of the trajectory. For this we will use the gromacs

trajectory viewer ngmx. Other possibilities would be VMD , Pymol, or gOpenmol.

Select a group of your interest ("system" might be good for a start),

and then, under "Display", click "Animate". Now a animation player

button appears near the bottom of the screen, which can be used to

view the trajectory. If you wish to filter different simulated

components, choose a different group under "Display" and "Filter".

We can see that the protein and its surroundings undergo thermal

fluctuations, but overall, the protein structure is rather stable, as

would be expected on such timescales.

A more versatile visualisation is provided by pymol. First, we have to extract

the protein coordinates and write to PDB format:

On the pymol prompt, type:

Play the animation by pressing the play button.

For a more quantitative analysis

on the protein fluctuations, we can view how fast and how far the

written a file called "rmsd.xvg", which can be viewed with:

We see the Root Mean Square Deviation (rmsd) from the starting

structure, averaged over all protein atoms, as a function of time. The

deviation of 0.1 nm is within the expected range for a protein like

the B1 domain at a temperature of 300K at such timescales. If we now

wish to see if the fluctuations are equally distributed over the

protein, or if some residues are more flexible than others, we can

Select group "3" (C-alpha). The result can be viewed with:

flexibility: around residue 11 and residue 48. To see where these

residues are located in the protein, type:

Under "Colours", select "Temperature". The protein backbone is now

shown with the flexibility encoded in the colour. The red (orange,

relatively rigid. It can be seen that the alpha-helix and beta-sheet

are relatively stable, whereas the loops are more flexible.


Repeat the same rasmol command for the x-ray structure (1PGB.pdb).


Question: How do the flexibilities in the simulation compare to the temperature factors in the crystallographic structure?

(note that the correspondence cannot be expected to be 100%, as the protein flexibility in different in the crystal than in solution (as in the simulation). Additionally, not only flexibility is encoded in the crystallographic B-factor, but also experimental error or model inaccuracy)

The simulation not only yields information on the structural

properties of the simulation, but also on the energetics. With the

Select "Potential" and end your selection by pressing enter twice, View the result with:

As can be seen, the total potential energy initially rises rapidly after

which it relaxes again.


Question: can you think of an explanation for


Please repeat the energy analysis for a number of different energy


We continue with a number of more specific analysis, the first of

which is an analysis of the secondary structure (alpha-helix,

beta-sheet) of the protein during the simulation.


First, we need to tell gromacs where the DSSP program for secondary structure

calculations can be found:

(or, if you get a message "export: Command not found.", you're perhaps using a

(t)csh in which case the command should be:)

Now, perform the actual analysis with:

select group "1" (protein), and convert the output to PostScript with:

and view the result with:

if "gv" is not installed on your computer, try "xpsview", "ghostview"

or "gs". As can be seen, the secondary structure is rather stable

during the simulation, which is an important validation check of the

simulation procedure (and force-field) used. The next thing to analyse

is the change in the overall size (or gyration radius) of the protein:

(again, select group "1" for the protein)

The analysis shows that the gyration radius fluctuates around a stable

value and does not show any significant drift. Another important check

concerns the behaviour of the protein surface:

(again, select group "1" for the protein)

We now see three curves together: black for the hydrophobic accessible

surface, red for the hydrophilic accessible surface, and green for the


Question: Is the total

exposed during the simulation?

system that was simulated consisted of protein, the rest was water. As we are

water, one could ask if we couldn't forget about the water and rather simulate

the protein. That way, we could reach ten times longer simulations with the


Question: Why do you think that it is

important to include explicit solvent in the simulation of a protein?

To check if your assumption is correct, repeat the simulation of protein G,

this time without solvent (to observe the effect more clearly, increase the

length of the simulation by changing "nsteps" in the file "md.mdp" by e.g. a


Question: What are the main differences to the

protein's structure and dynamics as compared to the solvent simulation?

(Hint: use programs like g_rms and g_gyrate to analyse both simulations).