The last lecture gave an introduction into protein sequences

(or primary structures), and we have learnt which information can be

extracted on the sequence level. In short, these include:

Today, we will focus on the last two aspects, as structural analyses

will follow later. First we will analyse the peptide hormone

As you may know, insulin is essential for normal metabolism,

as it stimulates glucose uptake after a meal. Malfunction of insulin

leads to diabetes, which is characterized by decreased glucose

tolerance resulting from a relative deficiency of insulin (or,

alternatively, a lack of sensitivity to insulin on the receptor side).

If you are interested in more background information on diabetes, here

is a good source.

For a sequence analysis of insulin, we obviously first need its sequence.

For this, we visit the SWISS-PROT database, which can be accessed via

"Swiss-Prot and TrEMBL" link (first link under "Databases"), and

search for "insulin". As you will see, there are hundreds of matches,

but none directly corresponds to human insulin. This is because on the

sequence level, insulin is stored as a precursor. After synthesis, the

form the active form of insulin. Thus, we select the sequence of the


The SWISS-PROT entry of human insulin starts with some general

information on the sequence, starting with basic entry information,

the name and origin of the protein, literature references connected

with this sequence, and some comments concerning the function. This

concerning insulin, like for example the Protein Data Bank (PDB),

where protein structures are stored. As we can see, lots of structural

information on insulin is available. In the section entitled

"Features", we can learn how the precursor sequence is related to the

active form of the hormone. As can be seen, the first 24 residues are

corresponds to the B chain of insulin, and residues 90-110 make up the

A chain of insulin. Also annotated in the SWISS-PROT entry are a

number of natural mutations, leading to different forms of diabetes.

Finally, near the bottom of the page we find the sequence. Click on

the so-called "FASTA" format. This is the sequence as we will feed it

to BLAST. Prepare the sequence for copy-and-paste to the BLAST window by


Now we open a new browser window to run BLAST, which also can be accessed

from the ExPASy Proteomics

Server. On the right half of the screen, under "Tools and software

BLAST, paste your sequence, and run BLAST with the default parameters.

After some time, we obtain the 100 database sequences closest to the human

insulin (precursor), sorted to their level of similarity. Select all sequences,

by clicking the button

"Select up to" and then the checkbox next to the last sequence. After that, from the drop-down menu next to the button

We now get presented the raw sequences in FASTA format. Select all

sequences for copy-and-paste, and open a new browser window at the European Bioinformatics

Institute from which we will run the multiple alignment server.

sequences have already been aligned, to assess the similarity to our

target sequence. Why do we need to do another alignment?
Try to

answer the question, and check if your idea matches our answer. 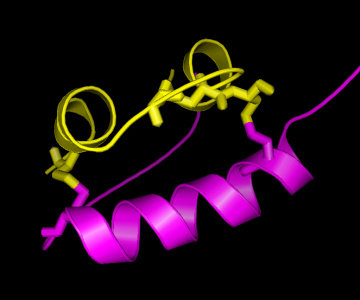 On the Services site of the EBI, under "C", click on

"ClustalW". Paste your sequences in the window and run ClustalW with

the default parameters. Depending on the load on the server, ClustalW

will take a while to complete. The results window shows an informative

header, with the number of sequences that was aligned and some other

statistics, followed by the actual alignment. Press the "Jalview"

button for an instructive, detailed view of the alignment. To focus on

those residues that are highly conserved get highlighted.


On the right, a picture of the insulin structure is shown, with the A

chain in yellow and the B chain in magenta. As can be seen, there are

two "bridges" connecting the A and the B chain, formed by Cysteine (C)

residues on both chains. This is an important structural feature of

insulin, strongly stabilising the structure. Therefore, it can be

easily understood that these C residues are among the strongly

conserved residues in the hormone. As is known from other structural

studies, residues interacting with the insulin receptor include:

these residues there is a clear reason for their conservation. For the

other conserved residues, the reason for their conservation is less

clear, although their mutation has shown altered activity, hence

Another application of multiple sequence analyses is the derivation of

evolutionary information, in particular the analysis of common ancestors

among different species, and their grouping (also known as taxonomy)

based on sequence similarity. This analysis is known as phylogenetic

analysis, and trees representing the sequence relationships are known

In this course we will generate two phylogenetic trees, and compare

the results, to see if the mutational pattern in the one protein

(and the associated phylogenetic tree) is similar to that of the

other. For this we will take the alpha and beta chain of hemoglobin.

Hemoglobin is the universal oxygen transporter in nature. It takes up

blood in red blood cells to the brain, muscle, or another destination

in the body where oxygen is required. In fact, the reason why blood is

coloured red is because of the hemoglobin. Hemoglobin contains iron,

which in that particular state is colored red, nut unlike rust.

Although part of the same protein, the two sequences of the alpha and

independently, and hence, two separate phylogenetic trees can be constructed.

For the sequence retrieval, we follow the same sequence as we have

done above for insulin, first for the human hemoglobin alpha chain (search

for "human hemoglobin alpha"), and then for the hemoglobin beta chain.

The sequence to select for the alpha chain is HBA_HUMAN (P69905), for the beta

In the BLAST search, search for "Eukaryota" only.

From the BLAST results, select only the sequences that start with HBA,

and HBB, respectively (i.e. no HBD or HBA2, etc); the easiest way to

achieve this is to select all

sequences and then to deselect the undesired sequences. Paste the sequences

in the ClustalW window, and this time, before hitting "run", select

"phylip" as "tree type" under "phylogenetic tree". After some

computation time, the EBI server will show the tree. Keep the ClustalW

chain. By default, the results are presented in a "cladogram", which

enables easy comparison of the individual groups. If you'd like to

the difference between the sequences end hence the time evolved since

the diversion from a possible common ancestor), right-click on the